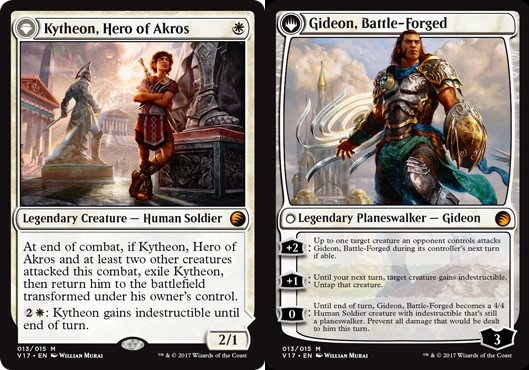 At end of combat, if Kytheon, Hero of Akros and at least two other creatures attacked this combat, exile Kytheon, then return him to the battlefield transformed under his owner's control.

+2: Up to one target creature an opponent controls attacks Gideon, Battle-Forged during its controller's next turn if able.

+1: Until your next turn, target creature gains indestructible. Untap that creature.

0: Until end of turn, Gideon, Battle-Forged becomes a 4/4 Human Soldier creature with indestructible that's still a planeswalker. Prevent all damage that would be dealt to him this turn.