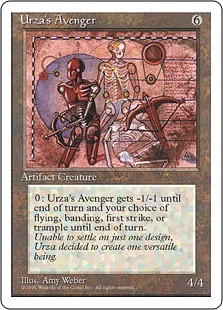 : Urza's Avenger gets -1/-1 and gains your choice of banding, flying, first strike, or trample until end of turn. (Any creatures with banding, and up to one without, can attack in a band. Bands are blocked as a group. If any creatures with banding you control are blocking or being blocked by a creature, you divide that creature's combat damage, not its controller, among any of the creatures it's being blocked by or is blocking.)

Unable to settle on just one design, Urza decided to create one versatile being.
Rare
Artifact